WeAppHeroes is a UN-backed app that connects nearby people to solve everyday problems through micro-volunteering.

In December 2016, while I was living in the Dominican Republic, WeAppHeroes' COO approached me with a proposal: join their team and take the already market-tested beta app to its full potential. After a couple of calls I was sold:

My mission was clear: create the perfect UX and then use Xcode to create an outstanding iOS app.

Initially, we did an attentive analysis and review of the existing product evaluating what was working great and what needed to be improved. Furthermore, after deciding what to keep, and what to scrap, we came up with new concepts & ideas that eventually became central parts of WeAppHeroes.

In this process, I also had the opportunity to work closely with the COO and the lead designer to create a powerful brand voice and identity.

Fast forward one year later, and the app was ready to be tested & launched. In the meantime, I became a fundamental part of the team: officially sitting on the board and taking the role of Product Owner. I was in charge to supervise everything involving the product, and coordinate development efforts across both iOS & Android. 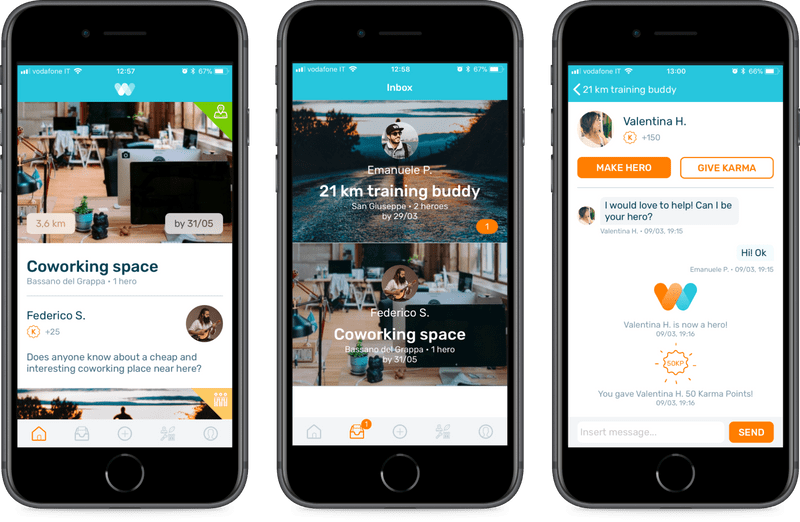 In May 2018 we partnered with Bassano del Grappa's Municipality for a soft-launch of WeAppHeroes. Together we organized a day-event where people could use the app to help people and organizations around the city, and collaborate to achieve various tasks such as cleaning the streets.

The event was a successful way beyond expectations: we had 3x the people expected, everybody loved the app and was ready to use it in their daily life.

A few weeks afterward, we welcomed a new team member: a Business Developer with the task to help us with the upcoming fundraising, our business strategy, and a large-scale launch plan.

Currently, WeAppHeroes is still searching for capitals, and planning the next steps.

Meanwhile, working together on WeAppHeroes, Emanuele (WeAppHeroes' COO) and I co-founded eighteen79, and a great business partnership was born.